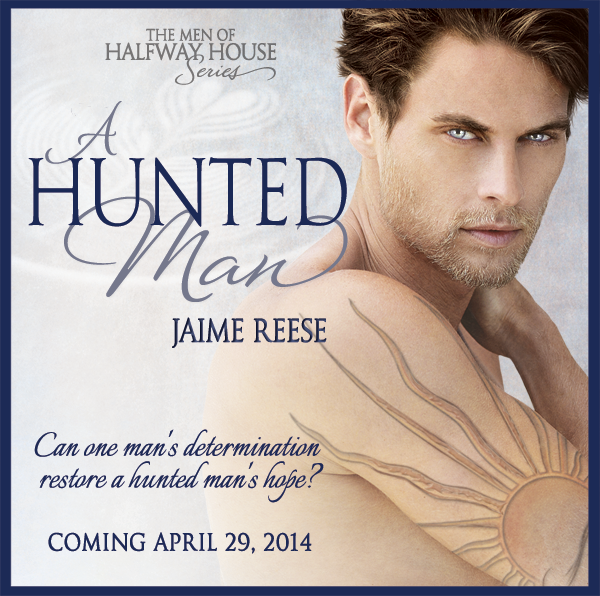 A Hunted Man releases in less than a week. I’m anxious, nervous and excited as hell.  The first place it will be available will be Amazon since I am at their mercy as a self-published author. The book will be available in paperback as well.  I will make the book available at other distributors, but I want to wait until it’s live on Amazon. Please bear with me.

A Note to Readers:
Aside from the romance in the story, there’s a mystery element as well. Early reviewers have been totally awesome about not sharing spoilers (A HUGE THANK YOU) but I can’t guarantee everyone will agree to take the same route. So be careful of spoilers others may post if you prefer to experience the full mystery as you read 🙂

As a reminder of the release, several blogs are participating in a Release Day Blitz (Thank you!) and a TWO WEEK Blog Tour that will start the Monday after release. I can use all the help I can get to get the word out of the upcoming release. And yes, a TWO WEEK Blog Tour. LOL  Dates and sites to come.

I will also be doing a guest post and giveaway at Sinfully Sexy Book Reviews. They made a pretty banner for me 🙂  <3

Originally, I began listing progress/updates on my book page here: A Hunted Man with a note that I would move the statuses off the page once the book was ready for release. To keep everything nice and pretty 🙂  So most of the following items (except the 2 most recent ones) were on the page as I moved along in the process.

Paperback proof arrived. I’m happy 🙂  It’s puuurty. Thick spine, but that’s what I get for writing a long book LOL No picture because, seriously, it just doesn’t do it justice. The cover is glossy (like most paperbacks) so the colors in the pics just don’t look like the real thing. So no pics, sorry.

I wanted to do something different for the occasional giveaway or promo item.

In Cameron’s story, he works in a diner and becomes ‘the coffee guy’ who makes lattes and learns how to do latte art (those decorative designs on the top where the foam is – that’s why you see that flowery looking thing in the cover art). So, I figured something different for a giveaway that ties into the story might be cool. I ordered a few of those coffee house type mugs and got them printed with the series name and book title (and yes, I deliberately left my name off them because I didn’t want to screw with the visual flow of the series and title lol). They’re cobalt blue with white printing on each side.

ARCs have been sent. Teaser graphics are almost finished 🙂

I have the final version back from the proofer.

Reviewing final set of notes from proofer 🙂  She liked it. Yay! It helps settle the nerves a bit knowing someone else likes the story.

Getting everything together for the cover reveal for A Hunted Man.

A teaser…the cover is an image of Cam at a very specific point in the story. He’s scruffy, and there’s a reason why 🙂 Cam transitions throughout the story, both inside and out.

I’m excited, anxious, edgy, worried, happy, stressed, and a whole other set of emotions that are so jumbled together I can’t even decipher them.

Reaching out to a few blog sites about release week appearances before the two week blog tour madness is scheduled to begin. And I have to say, everyone is so damn nice.

And the final is off to my proofer. Yay!

Managed to complete the edits while getting slammed with work from every possible direction. Finally doing my final read and any last minute tweaks to the story. This, for me/on my end, takes the longest. Yes, pen and paper LOL I actually print it out. For some reason, I read it differently when it’s printed.  Then it’s back to the editor to make sure I didn’t screw things up too badly 😛 …and for her review of my final changes.

Trying to complete a few blog interviews for the upcoming tours.

Another round of edits received. I can breathe a sigh of relief at this point. Things move along relatively quickly after this stage. Edits are minor and I zipped right through them.

First round of edits completed and sent back to my editor. Exhausting but fine. Exhausting because I actually go through each item and don’t just ‘accept’ a change without understanding ‘why’. Thankfully, nothing majorly wrong or holes to fill, but it’s a big manuscript.  Had to review over 2,000 insertions, deletions, comments, and other notations.

*note to self – 111K manuscripts take forever to edit LOL*

First round of edits received.  (afraid to open LOL)

Booked a blog tour. A short 3 day ‘spotlight’ tour for A Better Man and a longer two-week tour for A Hunted Man. I figured this was the best way to get the word out there about the books.

A Hunted Man – COVER REVEAL April 1.
Oh, the irony.  I know there are tons of peeps out there who thought Cam’s story would never see the light of day.
This is not an April Fools’ Day joke. Yes, he’s getting his story published. And it’s a long one LOL

A Better Man tour dates: April 8-10
(list of blogs and dates will be posted when finalized)

A Hunted Man tour dates: May 5-16
(list of blogs and dates will be posted when finalized)

Manuscript sent to editor. Now I sit and torture myself until I receive the edits back.

A Hunted Man sent to beta readers.  Only one scene change suggested and a minor tweak. Everything else is good to go.  Yay!

A Hunted Man is completed.